You might be wondering how we developed this program. Let’s us tell the history of the program.

Back in 2009, I am fustrated by how bad the interface is on MyAnimeList. There are third party clients for MyAnimeList, but they were limited. The most popular one is MAL Updater, which is unfortunately only for Windows. Since I use macOS (which is also known as Mac OS X back then), I wanted to develop my own client that can accomplish the same functionality. 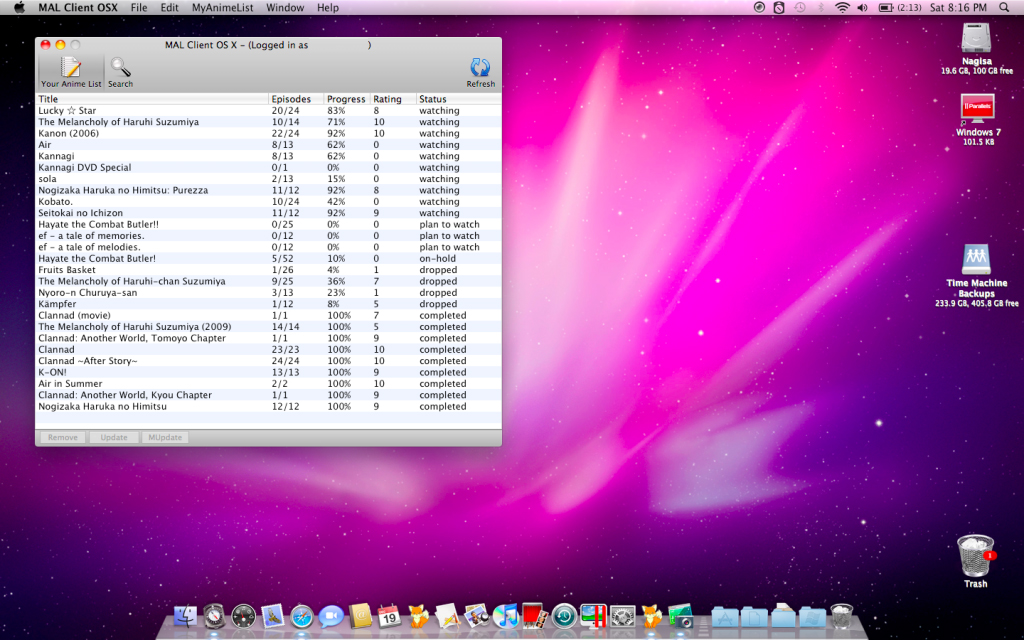 Since I only knew Visual Basic back then, my options are limited. I decided to use a copy of Real Studio 2009, I came up with MAL Client OS X, which uses the Unofficial MAL API. While the interface is clunky and looks somewhat outdated since it used Carbon instead of the native Cocoa interface, it worked. It allowed users to manage their anime lists and eventually manga list in the 1.5 Beta. It also allowed users to search for titles and even view title information.

In 2010, I dipped my toes into Objective-C and developed automatic updating functionality. There was a bunch of scripts that called itself MAL Updater OS X. However, it’s difficult to set up and you can’t control when you want to run it. I developed a 2.0 version, which runs as a menubar item application. It allows users to control when to have MAL Updater OS X automatically update a list. In the next few years, there were minor improvements including Twitter support.

Howeever, in 2012, the unofficial MAL API stopped working. With that, I put the project on hiatus until late 2014. This is when I discovered Atarashii-API, which allowed me to continue my work. Since then, MAL Updater OS X underwent major changes with a new interface, hotkey support, ability to correct titles, on-demand updates, stream detection, Plex detection and eventually torrent downloading. Unlike the Windows third-party clients, MAL Updater OS X can scrobble from any sources, including streaming sites that require web scraping.

On the other hand, Hachidori started development around the same time, allowing for Hummingbird scrobbling. I decided to develop it in response to a developer not allowing to use his stream detection program, which is used in HAPU. I developed the program using MAL Updater OS X’s code base and written the stream detection from scratch. Hachidori is still in active development, now with Kitsu support. HAPU on the other hand, pretty much died in 2015.

In 2017, MAL Library finally released. It have the same functionality as MAL Client OS X, but several times better with a modern interface.

On May 2018, we took our next step and released Shukofukurou, the successor to MAL Library, which allows users to manage MyAnimeList, Kitsu and AniList anime and manga libraries. However, At the end of that month, DeNA, who owned MyAnimeList disabled access to it’s API, thus breaking MyAnimeList functionality along with MAL Updater OS X. The developer for the time being focused on improving on Kitsu and AniList support. On July 2018, AniList support was officially added to Hachidori, giving users another alternative list service to update their anime libraries automatically.

Also on July 2018, a prerelease of Nekomata is released, allowing Windows and Linux users to export their Kitsu or AniList lists to MyAnimeList XML for backup or use on other services. However, it’s discontinued as we decided to focus our efforts only on Apple’s macOS and iOS platforms.

In late October 2018, Shukofukurou released on iOS, allowing users to manage their anime and manga libraries on AniList and Kitsu.

After a year later, MyAnimeList support has returned for our apps after Media Do, the new owners of MyAnimeList resumed development of the API. This allows Mac, iPhone and iPad users to easily update their MyAnimeList lists with one application.

MAL Updater OS X Group develops programs for macOS, mostly applications for Anime/Manga tracking sites. Japanese media have grown in popularity of Japanese popular media such as Anime and Manga. We develop mostly in Obective-C, but we do some C++, PHP, Swift, and C#.

Developing on the Mac is not cheap. We rely on donations to keep development alive as most of our applications are open source. However, we release updates on a regular basis for our applications and an active user base. We take pride in providing the best solutions to allow Anime and Manga fans who use a Mac, iPhone, and/or an iPad to easily track their progress.